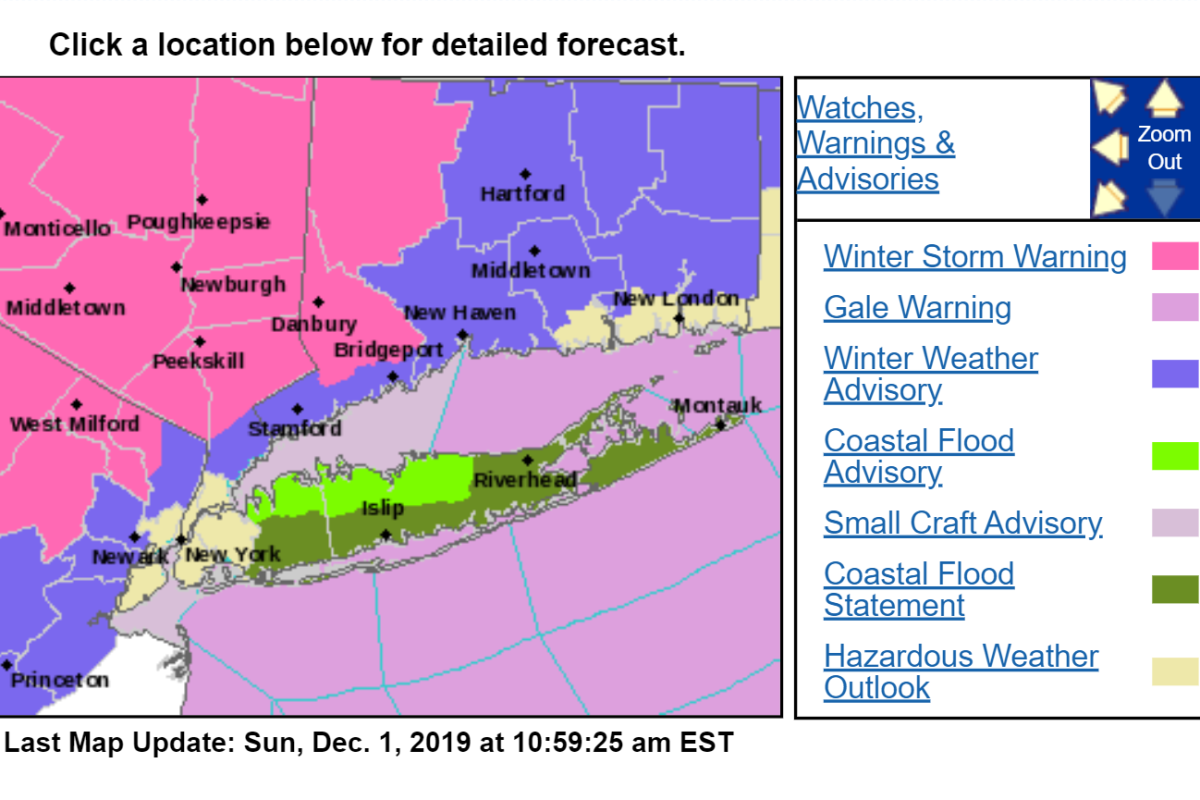 11:30 am – Snow and mixed precipitation has begun to fall across the NYC Tri-State Area as a two-day winter storm moves into the Northeast. December 1 is considered the first day of ‘Meteorological Winter’ – a period of time that lasts until the end of February and is considered the coldest three month period in the Northern Hemisphere.

This storm will be characterized by sharp precipitation boundaries over relatively short distances. The difference between coastal and inland locations, or even changes in elevation of only several hundred feet, will dictate both when and how much frozen precipitation will fall and accumulate.

Due to the mixed-precipitation nature of this early December storm, any actual snow accumulation will depend on how long snow falls before transitioning to sleet, freezing rain, or rain. Total storm accumulations will likely be impacted by any changeover to rain.

Conditions may vary significantly over relatively short distances. Be prepared for rapidly changing conditions and exercise caution while outdoors and on the road.

The National Weather Service has issued Winter Storm Warnings and Winter Weather Advisories throughout the New York City Tri-State Area. Updated ice accumulation forecasts have indicated a much more significant level of ice accretion for locations to the north and west of the city, making for potentially dangerous roadway conditions Tuesday afternoon as well as setting up the possibility for isolated to potentially widespread power outages going into Tuesday night.

Plan on steady snow developing by mid-morning Tuesday, with the potential for snowfall rates exceeding 1 to 2 inches per hour in the first couple hours of the storm. While the exact timing of the transition from snow to wintry mix (sleet, freezing rain, and snow) depends heavily on specific location, most areas – excluding Long Island, where the transition could occur more rapidly and sooner than elsewhere – will see this changeover around the early to mid-afternoon.

Roadways will become dangerous by early afternoon due to periods of heavy precipitation and ice accretion. Please avoid unnecessary travel during the worst of the storm, with extreme caution on both treated and untreated roadways due to ice, snow, and reduced visibility. Most locations should see conditions rapidly improve Wednesday as temperatures are expected to go above freezing.

Winter Weather Advisories and Winter Storm Warnings are currently in effect for locations along the I-95 Corridor. While snow accumulations through Sunday morning will likely range from 3” to 6” across much of the NYC Metro Area, the possibility for greater snow totals does exist should the storm system shift to the west, as does the possibility for lower totals in the event that the storm shifts to the east.

As the center of low pressure continues to develop, snow has begun to fall across portions of southern New Jersey and is expected to impact our area starting sometime in the mid-morning Saturday. While snow totals will likely remain below the 10” mark, expect moderate snow from around noon to 8 pm Saturday with the potential for some bands of heavier snow around the mid-afternoon. Most roadways will begin to see light accumulations of snow within one to two hours of the first flakes, meaning that all roadways will become slippery by the afternoon and evening. 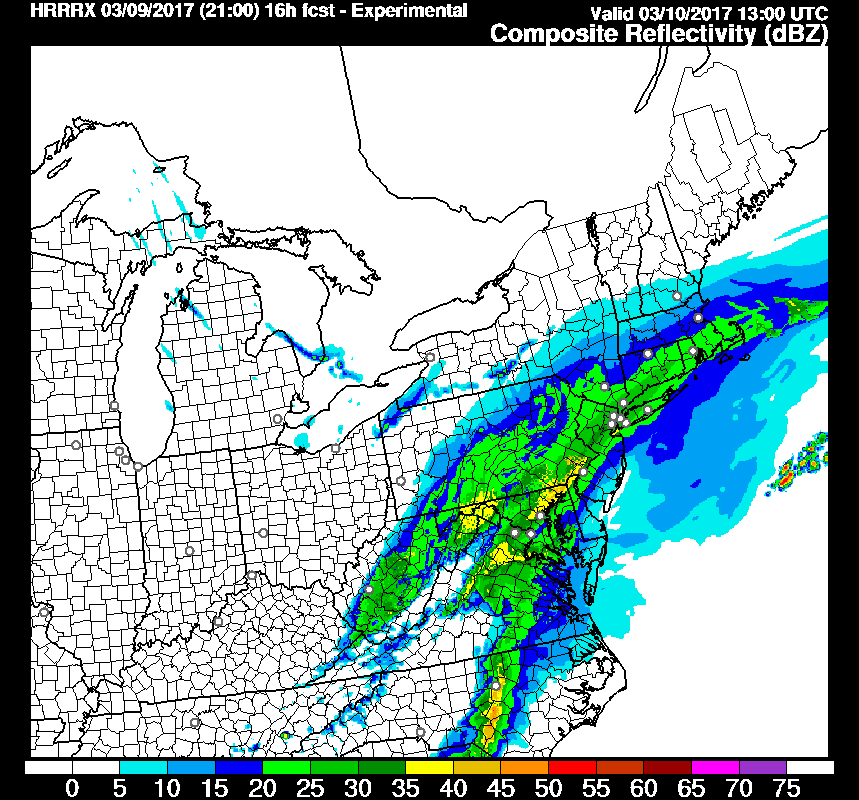 Over half a foot of snow is possible tomorrow across large swaths of the Mid Atlantic and southern New England. Starting around midnight tonight, snow associated with an incoming weak low pressure system will move into the NYC area. Most of the snow should move out of the area by noon, but not before dumping an estimated 4-8 inches of snow.

Going into Tuesday and Wednesday of next week, a potentially major Nor’easter may bring up to 2 feet of snow to New England and the Mid Atlantic. However, as this storm system is still not yet developed, it is difficult to forecast this with great accuracy, but recent trends have indicated that the potential for a major storm is increasing, and in the meantime, we’ll keep you informed.

A significant snowstorm expected to bring blizzard conditions and up to a foot of snow to portions of Virginia and the Southeast may bring up to several inches across the Mid Atlantic and the Northeast, prompting winter storm warnings and winter weather advisories for portions of Long Island and eastern Connecticut. The National Weather Service also forecasts light snow accumulation for much of the Metro Area, with areas of Long Island receiving as much as 6 to 8 inches of snow by tomorrow night.

Weather 360 forecasts up to 4 inches of snow for much of southwestern Connecticut, and a half foot or more of snow for much of Long Island. As the snow will start around midday, travel in the afternoon may become slick and at times there may be periods of low visibility.

This morning, locations across Connecticut, New York, and New Jersey woke up to snow showers and freezing rain; the first of the season. Although hovering just above freezing for most of the morning in portions of the Metro Area, snow was still able to reach the ground before melting. In locations further to the north, up to an inch and a half of snow has been reported on the ground, with snow expected to continue in some locations until the early evening hours before fully transitioning to rain.

Locations across the NYC Metro Area are now under Winter Weather Advisories as snow and other wintry precipitation continues to envelop the area.  Tonight, temperatures will continue to rise, and the wintry precipitation now will slowly transition to sleet and freezing rain, before tapering off as some rain showers across the area very early tomorrow morning.  Currently, areas still receiving snow will likely have accumulated 1-3 inches of snow by now, making it somewhat difficult to get around.  Ground temperatures are still below that of the air, meaning that areas receiving snow or other wintry precipitation will likely continue to see more accumulation.  Tomorrow’s commute will be messy in the early morning  until more rain moves in around 9 AM to wash some of the slush and snow on the roads away.

A Winter Weather Advisory is issued when the National Weather Service decides there will be hazardous weather in a certain area that will include some sort of wintry precipitation.

Most Winter Weather Advisories across the area are set to expire tomorrow around 7 AM.

Southern Connecticut Overview:  Currently, Southern Fairfield and Southern New Haven Counties are under Winter Storm Warnings.  Locations in southern portions of Northern Fairfield County can expect near-blizzard conditions, but due to less of a threat further north in the county, the National Weather Service has decided to keep the alert level at an advisory (likewise for Northern New Haven County).  Expect wind gusts around 40 MPH with snow totals 6-15 inches.