September 19, 2019 – Category 1 Hurricane Jerry is the latest addition to the National Hurricane Center Tropical Weather Outlook this evening. The 90 mph storm is moving to the west-northwest and threatens the Leeward Islands, where Tropical Storm Watches are currently in effect, as well as Bermuda, which is still experiencing rough waters from the once Major Hurricane Humberto.

Further to the west, the remnants of Tropical Storm Imelda continues to wreak havoc in Texas – where upwards of 40″ of rain have now fallen to the east of Houston. Large swaths of southeastern Texas, which were also slammed by the historic rainfall from Hurricane Harvey in 2017, are under Flash Flood and Flood Warnings.

The Rest of the Atlantic

More updates both here and on our Facebook page as conditions warrant. 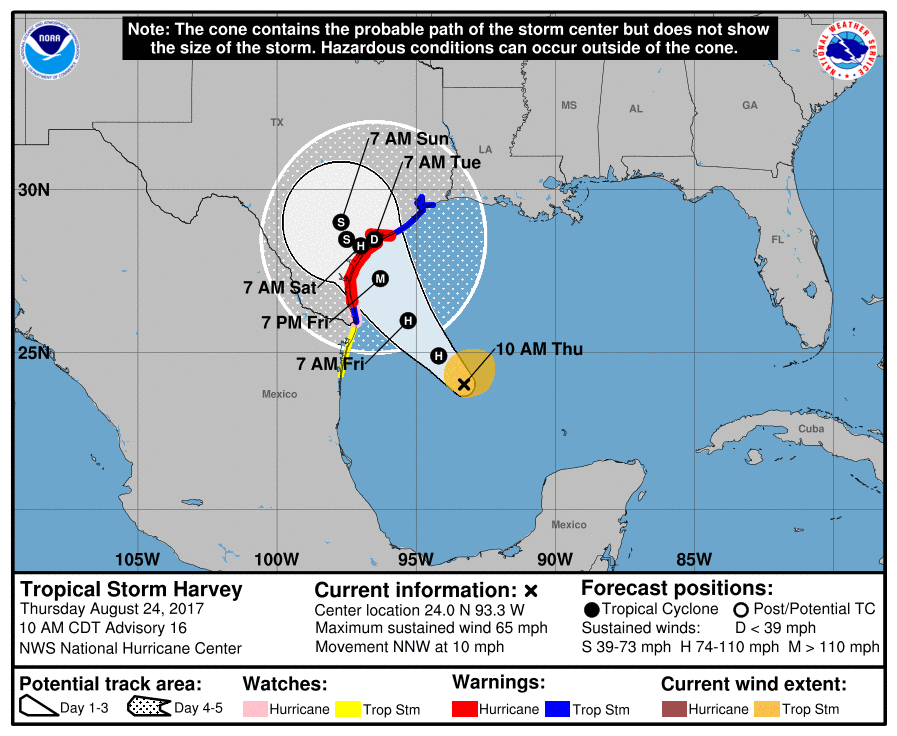 Tropical Storm Harvey is now expected to be the first major hurricane to make landfall in The United States in over 12 years. Up to 24+ inches of rain is possible across the Texas Gulf Coast due to the slow-moving nature of the storm. Sustained winds of 115 mph with gusts potentially approaching 140 mph are now expected across wide swaths of the Texas Gulf Coast.

Although the Atlantic Hurricane Season is winding down, a massive Category 4 Hurricane Patricia is quickly moving towards the Central Mexican Pacific coastline.  This monster storm will also help bring massive amounts of rainfall to these areas along with parts of the Southern United States over the next several days.

At this time yesterday, Hurricane Patricia was only a Tropical Depression with sustained winds of only 35 MPH, and the forecast track was only suggesting the landfall at a maximum of a Category Two storm on the Mexican Coastline.  So what happened?

Well, since yesterday at this time, the forecast models have shifted as to support massive quick development of the storm due to warm ocean waters, and minimal wind shear.  Even though the official forecast track yesterday called for a moderate hurricane impact on the Mexican Coastline, some computer models such as the HWRF and the GFDL (Hurricane Computer Models) suggested that at least a potential Category Three storm impact was possible starting late on Tuesday.  These same computer models have steadily suggested a more violent impact since then.

For anyone with interests across along the Central-Pacific Mexican Coastline, please continue to monitor the storm and visit the NHC’s website for more information.