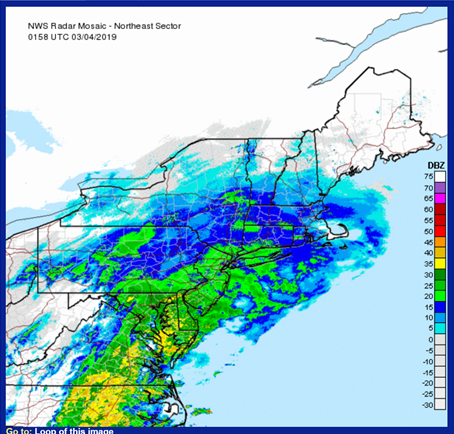 Snow has been falling for several hours in what may turn out to be 2019’s first significant nor’easter. Upwards of half a foot of snow is now expected throughout the entire New York City Metropolitan Area. Winter Storm Warnings are in effect.

Over the past 24 hours, several computer models, such as the NAM3km and HDRPS (both detailed and accurate computer models) have zeroed in on this storm lasting from Sunday afternoon through Monday around 6 or 7 am ET. Both computer models have pointed to snow totals averaging about 5 to 9 inches in Manhattan, Long Island, New Jersey, the Lower Hudson Valley, and southern Connecticut.

While snow has been falling for some time now, roadways are only now beginning to become covered and particularly hazardous in some places. Other than up to several inches of snow on roadways by tomorrow morning, it is possible that because of warmer temperatures earlier Sunday, there may be small layers of ice beneath the snow. Although temperatures will warm to above freezing on Monday, rapid refreezing Monday afternoon may create black ice on roadways.